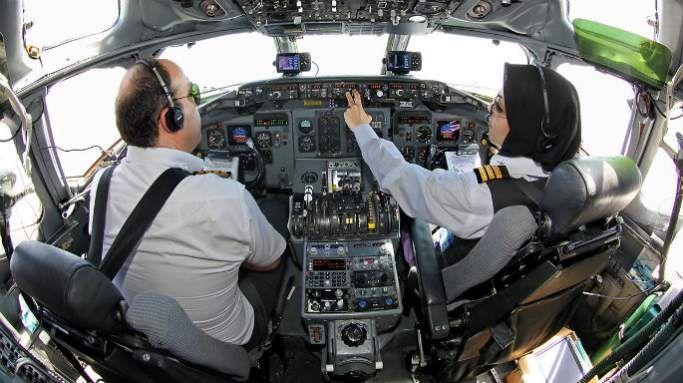 Boeing, the guys behind the Jumbo Jet, think that across the world, there will be a need for half a million airline pilots over the next two decades – with 94,000 needed in Europe alone.

With the incredible travel opportunities, high job satisfaction and sky-high salary, a career as an airline made number two in our list of the best jobs.

We won’t lie – it’s not easy, takes a long time, and is pretty expensive too. But if you’re never happier than when at 37,000 feet in the air, it could just be your perfect career.

So sit back, strap yourself in, and pay attention to the safety notices – it’s time to learn how to become a pilot.

'With 500K airline pilots needed by 2033, could this be the perfect career for high flyers?'

What does an airline pilot do?

Airline pilots fly people on long- or short-haul flights for leisure or work. They also carry goods from place to place to be delivered or sold.

There will normally be two pilots on board an airliner:

The captain and the supporting first officer will usually take it in turns to fly the aircraft, particularly on longer flights. Flying an aircraft is tiring business, and with so much at stake, it’s important whoever’s behind the controls is alert at all times.

It’s not like driving a car – pilots have many duties and responsibilities to make sure every flight is safe, economical, and doesn’t break any laws to do with things like noise pollution. Pilots also (take a deep breath!):

What skills do I need?

With all that responsibility, you won’t be surprised to learn that an airline pilot is a highly skilled job. If you want to become a pilot, you'll need pretty much every skill in the book, and to have them to a very high degree:

To become a pilot, you also need to be:

If you'd like to become a pilot, you'll need something called an Airline Transport Pilot’s Licence, or ATPL for short. You need to be 21 years or older to hold a full ATPL, but you can start training before this.

We’ll take a look at what the ATPL involves in a moment – but you’ll need some qualifications to start training for your ATPL.

As a minimum, you’ll need:

Because becoming a pilot is a technical role, you need to be analytical and have a good understanding of maths and physics. We strongly advise studying these subjects at A-level.

You’ll also need to be in tip-top shape physically. Before taking a piloting course, you’ll be tested for:

How do I get my ATLP?

Your training will involve:

You’ll then take some theory and practical exams and (hopefully) qualify for something called a “Commercial Pilot Licence” (CPL). This allows you to fly business jets, but not airliners.

If you choose to carry on, you’ll do yet more training, another set of exams to qualify for your ATPL.

Once you get this, you’re nearly done. You just need to build up 1,500 flying hours (just!) to become a fully fledged pilot and proud holder of a full ATLP.

Sounds tough – should I give up now?

It’s true, the ATPL is hard and expensive – and it’s also very competitive. British Airways launched a training programme in 2012 and take 100 trainees every year. Since the scheme started, they have had more than 4,500 applicants.

But please don’t be disheartened.

The important thing is to be sure you really want to become a pilot. You can get a flavour of this while you’re at school or college by joining your local Air Cadets, a scheme run by the Royal Air Force (RAF). Just Google “Air Cadets” to find your nearest branch.

Can I get help with the costs?

Yes, you might be able to get some help.

When deciding how to become a pilot, you should choose a training school approved by the Civil Aviation Authority (CAA). You can look up approved schools on the CAA’s website.

You should visit lots of schools, talk to instructors and students, and have a trial lesson before parting with any money. Take a look at guide to choosing a university for more tips to help you make the right choice.

What does a pilot earn?

Pay depends on experience, but if you become an airline pilot, you can expect to earn a lot of money:

We’re pretty sure you’re up-to-speed how to become a pilot – and this bit closer to being a real high flyer! Now it’s time to check out our interview with an airline pilot to find out what it’s really like.