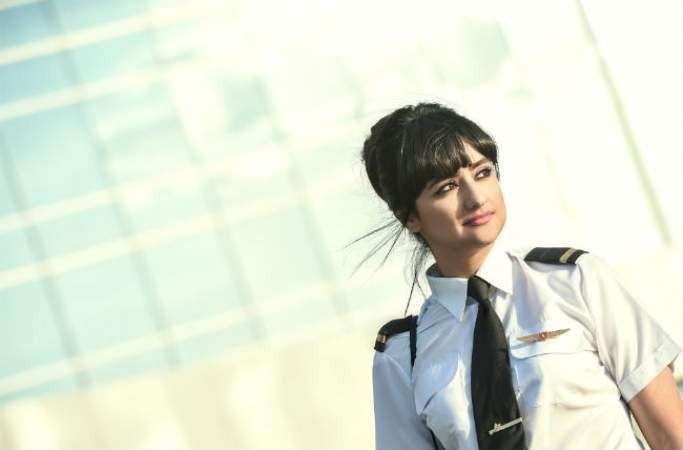 After lots of hard work and training, Ghada Al Rousi recently became an airline pilot. In fact she’s the first female pilot in the United Arab Emirates – impressive, right? She tells us what it’s like to fly a jet across the world, and why you have to believe in yourself to succeed.

What is your job? Pilot (First Officer)

How long have you worked here? 2 years

Before aviation I worked for one of the UAE government ministries.

2. What did you want to do when you were at school?

I have to say piloting was not something I dreamed of when I was a child. I studied Tourism Management in the UAE and the idea to become a pilot came a few years ago.

3. What made you want to do your current job?

The first time I entered a cockpit, I just had a sense that I could do this – become a pilot. As soon as I felt that way, it became my target to undertake a pilot training course. I considered the different options to become a pilot and settled on Alpha Aviation Academy in Sharjah in the UAE, as they offer the Air Arabia Multi-Crew Pilots Licence (MPL) programme. Once I had sat and passed the exams and interviews I was accepted and started my training. For the entry requirements, you are assessed in English, maths, physics, motor skills and psychometric. You need also an aeronautical medical exam and there’s an interview.

The course at Alpha Aviation took 20 months. This included classroom, simulator and aircraft-based learning, including basic flight training in Greece. I was having to focus a lot. I was also away from my family for a while when I was doing the basic flight training in Greece. Even during ground school, despite going home every day, I had so much to study that sometimes I didn't have time to be with my family for several days. With the ground school, I was not used to so much information in such a short time, and it was very tough.

I graduated from Alpha Aviation Academy as the first female Emirati with an MPL. It was not easy because I knew there were a lot of people [depending] on me to finish and to pass. After I graduated, I felt so proud to have done it for all the people who said, “Ghada will do it”, who had been waiting for me to pass and encouraging me throughout. I was happy to have done it for my country, because it is not easy.

Everyone at Alpha Aviation Academy was always very supportive. When I moved from the Academy to the Line Training in Air Arabia I also had a high level of support

It depends on if I’m flying or not. When I’m flying the entire day is dedicated to the flight, and I start preparing for it well beforehand. When I have a flight I always study the destination where I’m going, the weather, etc.

Some passengers can be unpleasant sometimes but we can’t let that affect our focus and our job. We have to deal with it and we count on the Cabin Crew to support us with that. Sometimes we have delays which can increase stress levels, especially if we are out of our base.

The weather, especially in the Indian area can be very challenging, forcing us to double our attention and calls on all the skills we learned during training. But it’s not something I get afraid of or especially worried about; it is part of the job, it’s the same for everyone flying and we have been trained for it.

When I’m not flying I try to live a normal life like any girl of my age, spending time with family and friends, going shopping and to the cinema. When I have a longer period without flying, I like to travel.

6. What’s the best thing about your job?

I have been lucky that my job has enabled me to travel to many places. With Air Arabia I have been to Moscow, Bombay, Pakistan, Nairobi, Alexandria, Istanbul, Bahrain and Kuwait, to name just a few.

In my downtime, one of my favourite places to visit is London. But wherever I am flying to or visiting, I always miss my country when I’m away.

7. What is the most challenging thing about your job?

Until now in my career as a pilot, the biggest challenge was to complete my training and become First Officer. Now that this part is done I’m looking forward for new exciting challenges.

8. What advice do you have for people who want to do what you do?

The most important thing to remember is that being a good pilot doesn’t depend on being a woman or man. What matters is how much you love your job and how hard you are willing to work.

I fly with both male and female pilots and the only thing that is important is their professionalism, not their gender.

The same rule applies for any career, whether it be a pilot or another profession in a male dominated environment (for example, another STEM-based career). As long as you believe in yourself, are confident, and are willing to work hard, you can succeed.

Some people are so proud and happy about [my becoming a pilot], asking me about my experiences. But others have said: “What?! A woman becoming a pilot?! This is a man’s job! I won’t get in the plane with you!”

[To anyone who might be in a similar position], I would say: “Don’t listen to the others, listen to yourself. So if you have a passion for the career, don’t give up! It’s your life.” If you dream of something you have to do it, or at least try to do it.

Right now there are around 130,000 commercial pilots in the world, but only about 3% are women. Boeing predicts that by 2035, 617,000 more pilots will be needed. If this increasing demand for more pilots is to be met, we must make sure that more women have the opportunities and confidence to enter the cockpit.

I want to be a Senior First Officer first, and ultimately I would like to be a Captain. You never jump positions though. I still need more experience, I need more hours. I need to make sure that I am ready to be a Captain. So I just need to work up one step at a time. Later on I would possibly also like to become an instructor.

If Ghada's story has inspired you, check out our Transport & Logistics Career Zone where you can find out more about this exciting job.

How to become a pilot

How to make a difference in your career

How to become a firefighter