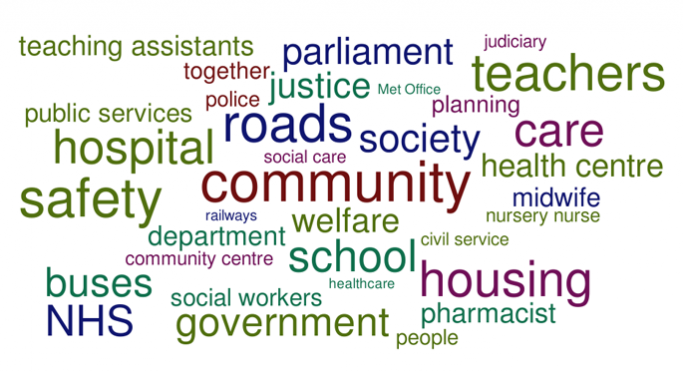 "I can say, hand on my heart, that working in the public sector is the most rewarding way I can contribute to society and earn a living."

In this guide, we explain what the public sector is, what public sector jobs you can do, what skills you need and how to begin your career.

'Public sector jobs make a real difference to people's lives while offering wide choice and the chance to go far. Here's what a public sector career could offer you'

What is the “public sector”?

The public sector is made up of all the organisations and bodies run (directly and indirectly) by the government and paid for by taxes and other public money. It is called the public sector because it is owned by all of us, and it is made up of public services for everybody to use, such as healthcare and education.

This great video explains what central government is, how it differs from parliament and how services are paid for in the public sector (it's good fun too):

What are public sector jobs?

Public sector jobs are many and wide-ranging; they make up almost 17% of jobs in the UK. There is also a difference between the public sector and “public services”. Public services are services available to everyone, but they may be provided by a private company hired by the government or a local council. Strictly speaking, you don’t have a public sector job if you work for one of these private “contractors”.

Here is an overview of public sector jobs:

This is just a snapshot of the job roles on offer in the pubic sector. Because it is made up of central government, local councils and an almost endless list of agencies and bodies, you could work in pretty much any capacity you can think of. Roles include database developer, project manager, software engineer, admin assistant, customer service officer, civil engineer, cybersecurity officer, architect, analyst, actuary, accountant, IT manager, meteorologist, driving examiner.

This video shows what it’s like to be a nurse:

Many public servants say they were drawn to the public sector by the desire to make a difference, make a contribution to society or their community and to help other people. They were also attracted by the range of opportunities, the possibilities for career progression, the security and benefits such as salary and pension (although pay has been frozen in the public sector for several years now due to government cuts).

This very much depends on what kind of job you’d like to do, but it’s worth bearing in mind that there are possibilities straight from school without any additional qualifications all the way up to university graduates with degrees or even postgraduate qualification.

Planning officers, for example, will usually need to take an additional qualification after their degree to qualify for their role. Doctors have to study for seven years to attain a medicine degree, while nurses and social workers also need degrees, as do many IT, engineering and finance professionals. Apprenticeships are also becoming more and more available for particular roles.

It is also common to progress from an entry-level position to a senior position from within the public sector. For example, a librarian could become a head librarian, or a customer service officer or admin worker could progress to become a manager.

In this video, apprentices on the Civil Service Fast Track Apprenticeship Scheme explain what it is like:

What skills do I need?

Again, this very much depends on the job you take, but a sense of public duty is vital. Other common skills include:

Attributes such as a caring and compassionate nature will also stand you in good stead, as will patience and good humour, particularly if you are working with vulnerable members of the public reliant on you for support.

Check out our Public Sector & Government Career Zone to learn more about the variety of ways you can lead an exciting and rich career in the public sector.