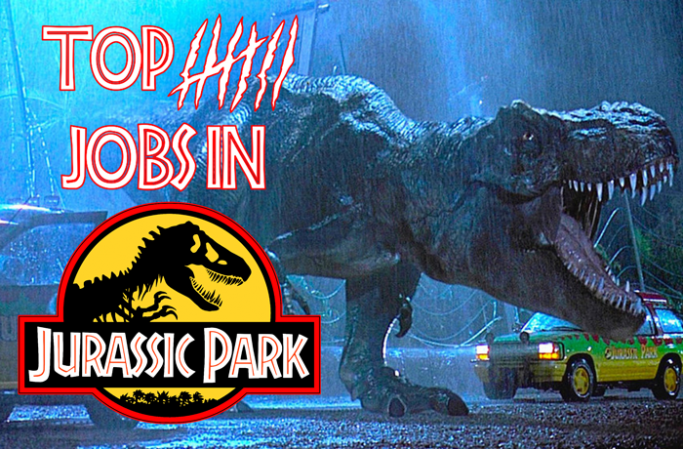 Calling all JP fans! Do you want a career 65 million years in the making?

You may not be able to work at the Park – but this guide to the top 7 roles in Jurassic Park could just be the next best thing.

Oh, and we missed out the “blood-sucking lawyer” – nothing against legal professionals. We just didn’t think it would be in the spirit of the film!

'Ever wanted a job at Jurassic Park? Here are the top 7 prehistoric careers'

Ian Malcolm is the excitable chaotician who joins the team brought to assess the safety of the Park. He is an irrepressible champion of chaos theory – which says predictions about large systems are almost impossible due to the combination of a huge number of unknown factors. Using chaos theory, he theorises that it is impossible to gain complete control of an ecosystem – especially one which has been extinct for over 65 million years.

Chaos theory is a branch of mathematics. To follow in Malcolm’s footsteps, you should study maths at A-level/equivalent then take maths, statistics or a similar subject at university. You could go on to a career in academia or as an advisor or consultant in fields such as science, technology, epidemiology, meteorology, pharmaceuticals or the public sector.

Dennis Nedry is Jurassic Park’s unreliable computer programmer with a serious debt problem. So unreliable, in fact, that his decision to shut down the electric fence network so that he can smuggle out embryos to sell to rival firm BioSyn results in a bloodthirsty rampage by the Park’s prehistoric inhabitants. He meets with a grisly fate at the claws of a venom-spitting dilophosaurus which attacks him as he tries to drive through the Park to the dock.

Despite Nedry’s money worries, a career in computer programming could be very financially rewarding – and see you using your brain to figure out complex problems in your day-to-day working life. You’ll need a STEM background, studying maths, computing/computer science or a similar subject – and ideally learning to code and applying this outside your studies.

John Hammond is the mastermind behind the wonder that is Jurassic Park (until everything goes wrong). He started his career decades earlier running a flea circus and by the time the movie takes place has become hugely wealthy. Despite a lifetime of successful business ventures, money isn’t his motivation – he just wants to create something “real” and awe-inspiring that people can enjoy.

If ideas are your thing, you could be a budding entrepreneur. Recent research suggests that just over half of young people (51%) would like to start their own business – while another 35% are open to the idea and only 15% would rule it out. Schemes like Young Enterprise could give you experience of developing an idea and running a business.

Henry Wu is the genius who splices dinosaur DNA with that of modern-day frogs to finish the incomplete prehistoric sequences. It may be genius – but it’s just another way in which things go wrong and life finds a way. It turns out some species of frog change sex spontaneously, and this happens to the dinosaurs too, who are then able to reproduce and multiply – just one of the ways Jurassic Park loses control of its dino inhabitants.

Geneticists study genes, including how they are inherited, how they become active (and how they can be inactivated) as well as how they mutate. Gene editing is an area of great interest not only to people who want to bring back dinosaurs, but more importantly to those who want to treat genetically inherited diseases by changing the gene sequence. You will need to study biology and chemistry then a bioscience subject at university – and you could go on to a rewarding career in academic research or the pharmaceuticals industry.

Ellie Sattler joins the team sent to sign-off on Jurassic Park and is the first to cotton on to what is really going on on the island when she finds the leaf of a prehistoric plant which has been extinct since the Cretaceous. Ellie helps get Jurassic Park back online by a braving raptor-infested jungle to get to the compound – where she meets (and just about outwits) some very hungry dinos.

Palaeobotany is a niche field but it could lead to a career in academia, within the classroom or out in the field. To follow in Ellie’s footsteps (a bit like the raptor in the compound) you should study biology and consider subjects such as palaeobotany, earth sciences, palaeontology or botany at university. A PhD or master’s will also help.

Alan Grant and Ellie Sattler come as a pair – with Grant complementing Ellie’s plant knowledge with his expertise in all things dino-related. As he journeys through the park with Hammond's grandchildren Lex and Tim following a T-Rex attack on their vehicles, he ends up forming a strong bond the youngsters - despite previously having an aversion to kids (who he thinks are smelly and annoying).

Palaeontologists are found in university classrooms, offices and labs, or out in the field, digging up the bones of prehistoric animals from dinosaurs to early mammals. They add important knowledge about the natural history of the Earth which help us gain a better understanding of the world, both in the past and also in the present day. You will need a strong science background including an A-level/equivalent in biology, and a university education in palaeontology. You may need a master’s or PhD.

John Arnold is the rather impatient but highly skilled engineer who designed, built (with Nedry’s programming support) and operates the computer systems Jurassic Park runs on – as a result, the entire site can be run from a small room with minimal staff. Unfortunately, he meets a grisly end at the claws of a raptor when he visits an external compound to turn the power back on.

Systems engineers need a background in maths, physics or other related subjects such as computing/computer science before going on to complete a systems engineering or similar degree at university. Many systems engineers have a master’s degree or even a PhD as well. You could go on to a well-paid career in sectors including technology, science, engineering, finance or business.

Like this article? Check out our guide to the top 5 jobs in Stranger Things.