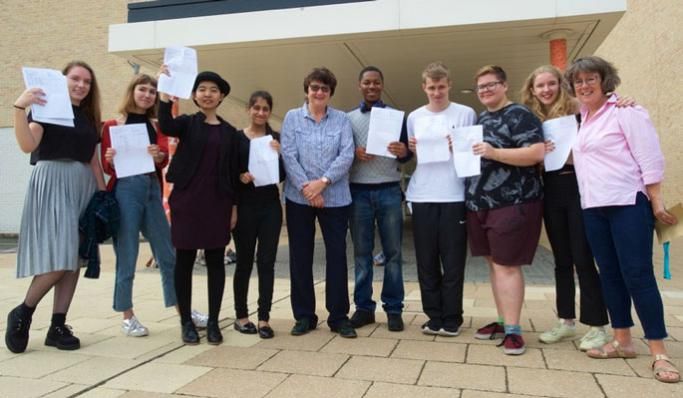 Maybe you’re thinking about studying A-levels but aren’t quite sure what options they can lead to. Or perhaps you’re in the throes of an A-level course and want to know a bit more about your options.

University probably won’t come as a surprise, but did you know that A-levels aren’t just a stepping stone to a degree.

So, let’s tackle the question “what can I do with my A-levels?”

'A-levels aren't just good for university - employers are a big fan, and you'll need them for certain apprenticeship schemes too'

What can I do with my A-levels?

We bet that a good number of you reading this article are studying A-levels – or thinking about studying them – because they will help you gain a place at uni.

So it’s probably not a huge revelation to point out that one thing you can do with your A-levels is go to university!

This means just over half of A-level students go on to study at university. But university isn’t the only thing A-levels are good for. One alternative is to…

The newer, high-level apprenticeship programmes require applicants to have A-levels or equivalent qualifications. Higher and degree apprenticeships are alternative pathways to university, preparing apprentices for a high-skilled career, and include university or college study as part of the course.

If you know what you’d like to do in your career, you should find out whether apprenticeships are available in your field of work. If you choose an apprenticeship, you will earn a wage while you train, and have any tuition fees paid for you courtesy of your employer and the government.

In a 2017 government survey, employers picked out A-levels alongside NVQs and BTECs as the qualifications they were most familiar with. In general, they tended to view A-levels more highly than technical or vocational qualifications (although there was a lot of variation between industries).

This means that A-levels hold a lot of currency with employers. Having A-levels demonstrates to employers that you are advanced in desirable skills such as problem-solving and communication, as well as research and analytical skills. They show you can commit to a long, demanding project and achieve good results.

What A-levels should I study?

All A-levels are great! But universities and employers regard some A-levels as better than others.

“Facilitating subjects” is a term used to describe certain A-level subjects that the prestigious Russell Group universities look on particularly favourably. You can see a list of them here.

If you have your heart set on particular A-level subjects, you should totally do them. Nothing beats passion for your subject! But you may want to set one eye to the future and make sure you include one or more of the highly regarded subjects in the mix.

If you have some idea about what apprenticeship or degree you want to do, be sure to find out what A-levels are required to qualify for your course or programme, as some have very specific requirements. For example, to study for a physics degree, some universities require applicants to hold maths and physics A-levels.

We hope this article has helped you answer the question “What can I do with my A-levels?” Check out this guide to the different options open to you after you’ve completed your GCSEs.

Lead image via Flickr, Students on campus via Wikimedia Commons, Young person at work via Pixnio