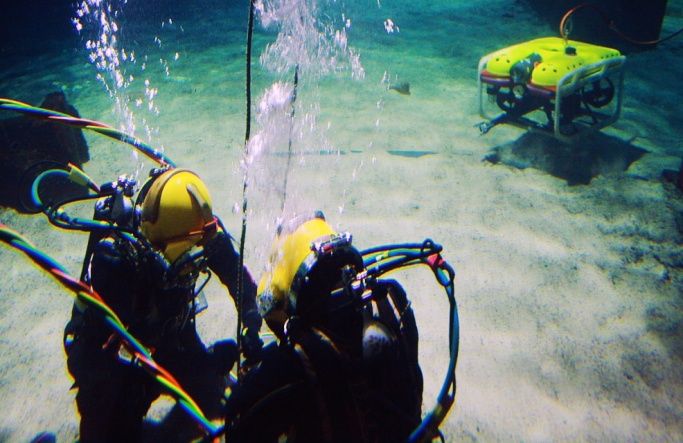 Looking for something different from the traditional 9-5 job, the chance to travel and work with your hands?

Commercial diving could offer all of these things plus a unique work environment… underwater!

We caught up with Ali MacLeod, Air Diving Manager at the Underwater Centre to find out how to be a commercial diver, what skills you need and the kinds of work they do, plus the excitement of diving for your day job.

What kinds of work does a commercial diver do?
Commercial diving work usually involves manual labor, but your work site is underwater.

As an inshore diver, you would mainly be involved with civil engineering projects (e.g. bridges and tunnels) and offshore diving work is mainly for the oil and gas industry, although fish farms and even the film industry employ divers too.

A lot of salvage work takes place too. Recently the Costa Concordia salvage employed a large team of divers, as did the recovery of casualties from the ferry that sank in South Korea in 2014. Divers may be expected to be involved in the recovery of aircraft too as well as ships.

What skills do I need to be a commercial diver?
You'll need the ability to problem solve and work as a team, a professional attitude, good awareness of safety and reliability. A bit of a sense of adventure helps too. If you enjoy working with your hands or tinkering with things like bikes and cars then diving could suit you. Some jobs are specialised, but most involve working with tools just as you would on mechanical or construction jobs on land.

How do I get started?
To become a commercial diver you must attend a commercial diver training school. A leisure diving qualification isn’t suitable for 99% of the work that’s done underwater. It can cost several thousand pounds to train as a diver and the training lasts about 2 – 3 months.

Before starting a course you'll also need a medical certificate of fitness to dive. You don’t have to be an athlete, but you must be reasonably fit to pass and looking after your health is certainly a good idea if you want to be a diver.

Diving courses involve both theoretical and practical training but mostly practical as this is what will really prepare you to become a successful diver. At the Underwater Centre, we teach the principles of diving physics, decompression theory and diving related illnesses including how to avoid them and manage them in the rare event something goes wrong.

We teach about the equipment and the tools you’ll use underwater too. Once you’re qualified and have a certain number of working dives in your logbook, you can then train to become a saturation diver. This technique allows you to dive deeper, using helium and oxygen breathing gas mixtures. As a saturation diver, you would be expected to live under pressure in a decompression chamber for up to 28 days on a job.

Divers can train from 16 years old, but it's unusual to find work that young and you must be at least 18 to work as an offshore diver.

Divers inside a saturation bell.

What other skills do I need?
If you want to become an inspection diver, for example, you might need to learn photography and understand faults found in metal such as corrosion and weld faults. For other roles, concrete inspection, underwater welding and cutting skills are often required too. Because divers can work very remotely and live in chambers where it takes days to decompress back to the surface, they may have to learn some medical skills including setting up I.V. fluids and taking care of a casualty who has been injured on the seabed. As with any offshore work you will need an offshore survival qualification and depending on the job, the company you work for might require you to do extra safety training.

What are the best parts of the job?
The satisfaction of having done a good days work in an environment that most people never get a chance to experience and working together as part of a  team. Diving can take you anywhere in the world and travel is likely to be a big part of your career. Diving also pays pretty well especially if you work offshore in the oil and gas industry or in deeper saturation diving.

What are the challenges?
It’s not a 9-5 job with weekends off, so you may be expected to be away from home for weeks at a time. Sometimes there may be times when you are out of work longer than you’d like to be, for example when the winter comes in the UK there aren’t as many diving projects taking place due to the weather, although many divers work in other parts of the world too. 12 hour shifts when the weather is miserable in the winter isn’t as much fun as working during a long hot summer!

What's the most exciting or unusual job you've worked on in your career?
Most jobs are pretty exciting in their own way. One of the first jobs I supervised many years ago involved measuring the amount of energy that tidal flow can produce. The device sank so we had to salvage it. It was right in the experimental stages of renewable energy too and it was fun to be involved in those early days. I also helped plan a job using an experimental lifting device underwater. There's something exciting about trialling new things for the first time. I’m due to be involved with some training for the Russian Navy soon so that’ll be a new experience. I’ve also assisted the police on a couple of projects, which is quite different to regular commercial diving. I was recently involved in a film shoot for a television advert which was a lot of fun!

Any advice for people starting out?
If you want to be a commercial diver then get involved in work that gets you using tools and working with your hands, like at a local garage, a building site, or farm. Keep studying in school too as most diving related courses involve theoretical training including physics and anatomy.

When it comes to looking for work, you’ll not see diving jobs in the local press or job centre. Most work is found through networking and it’s often whom you know along with your experience that gets you work, although some jobs are advertised online. There’ll be some chasing around to begin with, but once their foot's in the door then most divers will find the work, especially if they’re willing to travel.