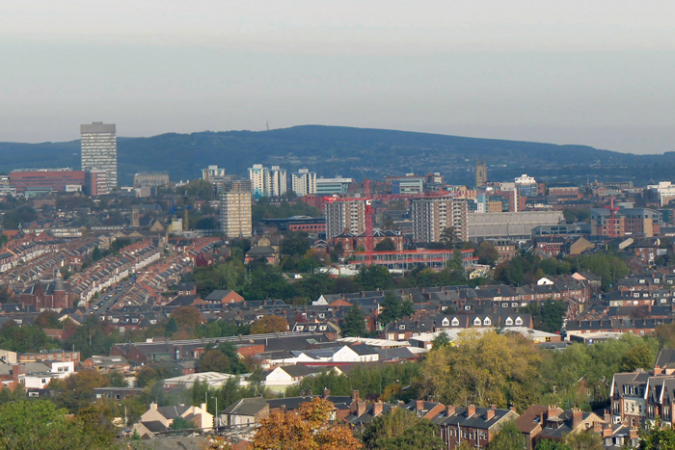 You may have heard Sheffield referred to as the “Steel City”. That’s because of the city’s proud tradition as a steel-making hub. In fact, stainless steel was invented in Sheffield in 1912.

Although steelmaking, manufacturing and construction remain an important part of Sheffield’s identity, much of the work today is done by robots.

Nowadays, industries like wholesale and retail, health and education sit alongside manufacturing as major sources of employment in the city. The local authority is also working to develop high-tech and creative industries in the city and surrounding area.

In this article, we take a look at the city and see what jobs in Sheffield can offer you.

'Check out this guide to finding jobs in Sheffield'

Sheffield is home to 582,000 people, making it South Yorkshire’s biggest city and one of the largest cities in the UK. It is situated near the border with Derbyshire, close to the beautiful Peak District, making it a great place to live if you’re keen on hillwalking, fellrunning, mountain-biking, caving or other outdoor activities.

Sheffield is internationally famed for steelmaking and played a crucial role in the Industrial Revolution of the 19th century. Stainless steel was “discovered” in Sheffield by Harry Brearley in 1912. Until the 1980s, coal and other forms of mining were also a key part of the local economy and the Houses of Parliament were built with limestone dug up nearby.

Today, Sheffield’s universities continue to be at the forefront of technical innovation. The Advanced Manufacturing Park (AMP) is home to partnerships between the universities and companies such as Boeing, Rolls-Royce and McLaren. Sheffield is home to two universities: the University of Sheffield and Sheffield Hallam.

Take a look at this video made by University of Sheffield in which graduates talk about what they enjoyed about living in the city. Although it’s made for prospective uni students rather than people looking for jobs in Sheffield, it offers a good insight into what the city’s like:

What are Sheffield’s main industries?

According to the Office for National Statistics, Sheffield’s main industry is the Wholesale and Retail Trade and the Repair Of Motor Vehicles And Motorcycles, which makes up 15.8% of people employed in the local area (or 119,000 jobs in Sheffield). That’s a similar percentage to nationwide.

Manufacturing & Construction: Although much of it is now automated, steel-making and other types of manufacturing, such as car-making and the manufacture of aircraft parts, still play a major part in the local economy.

Education: The two universities are among the city’s largest employers and the many schools and colleges across the area also employ a large number of people.

Sheffield’s regional council – the Sheffield City Region Combined Authority – is focusing on growing the technology and creative sectors. It highlights the technical wing of the university – the Advanced Manufacturing Research Centre (AMRC) – as important to future jobs. The sectors they highlight are:

Who are Sheffield’s biggest employers?

The city’s biggest employers providing jobs in Sheffield include:

University of Sheffield: Founded in 1897 when some earlier academic institutions were merged, the university now employs just under 8,500 people.

The city is home to many call centres:

A major steel manufacturer in the area is Tata Steel. Food manufacturer Mondelez International has a factory in Sheffield. Tech companies include ARM Holdings, Cap Gemini and IBM.

Sheffield City Council employs over 8,000 staff, including staff employed by the Local Education Authority which runs the city’s schools.

Find out more about jobs in Sheffield

You can get more information about jobs in Sheffield by visiting:

Jobs at University of Sheffield

You can find out about what it’s like working in cities up and down the UK by checking out our Finding a Job pages.